Sometimes you think a conversation’s about to get seriously weird…

This evening, Wes and I were talking about one of his school friends, who had told Wes he couldn’t have a certain TV character as a favorite because she was a girl. Wes was pretty clear without my having to offer counsel that that was dumb and you could like anyone you want, but wanted an explanation as to why someone would say that. “He’s a 4-year-old misogynist” seemed harsh, so I stalled for time.

“Isn’t he friends with girls at your school?”

“Yeah! We play with girls every day! We pretend we’re monsters and chase the girls around. Then when we catch them we say [regretful voice] ‘Oh, I put your sister in the lover.’”

“I put your sister in the lover.”

“Mommy! The stuff that comes out of volcanoes!”

We never got back to the original question, but I think it’s best that I don’t attempt to speak with authority on any subject for at least 48 hours.

Posted in Incidentally, The Boy | 2 Comments »

In which it’s more fun to assume a child is responding to your whole sentence rather than just one part. 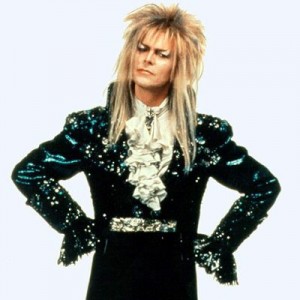 “This is David Bowie. You know David Bowie, right? Oh – maybe you only know him as the Goblin King.”

“Is his goblin castle underneath us right now?”

“Well, he doesn’t really – uh – David Bowie is an actor, so sometimes he makes his hair all big and goes underground to live with goblins, and other times he’s a musician who makes his own records in a studio.”

Did I promise you Wesley stories? 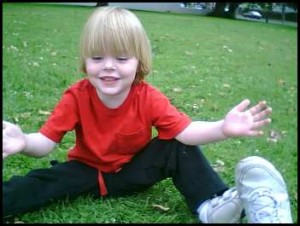 A few weeks ago, I got the sad news that one of my sister’s dogs, a Doberman named Pepsi, had died suddenly after developing a fast-growing tumor (4 pounds overnight). Since we were going to her house for Easter, I knew I had to break it to Wes. I will admit that the thought crossed my mind that a relative’s pet might be a nice gradual way to introduce death to a preschooler – and I was punished for the selfishness of that thought a few days later.

Had I spoken to my sister about this, you see, I might have known that she had somebody else’s Doberman staying in her dog run. The conversations between Wes and various relatives and party guests that began, “My mommy thought Pepsi died, but look, there she is!” were legion. The relatives and guests explained the truth, but it was not sticking in the face of concrete evidence.

Finally, most of us sitting at the dinner table watching him explain Pepsi’s resurrection to someone else, there was a collective giving up. So I’ll need a redo on this one the next time we visit, I guess.

“Yeah… wait, did she die three days ago?”

Close enough. I like a little Jesus/Doberman humor at the holidays, don’t you?

As those of you with little kids doubtless know, Jack Black recently made an appearance on Noggin series Yo Gabba Gabba. The day it first aired, I picked Wes up at school and told him about this new episode with this really funny guy on it and how much he was going to love it – except I didn’t check that the DVR had picked it up. Which it hadn’t. Are you detecting a theme regarding me being a dumbass?

So naturally, my child was reduced to heaving sobs over not getting to see this awesome person he had not known existed 15 minutes earlier. It was then I remembered someone had sent me – for Wes – a DVD of School of Rock. I remembered, fuzzily, people having mentioned showing this to 4- and 5-year-old kids. Were these smart people? I do not recall.

What I should have realized, though, was that my kid, with his explosive energy, hilarious delivery and intense musicality, was primed to find Mr. Black an excellent role model. And then maybe I should have thought about whether I was ready for him to blossom in quite that way just yet.

First, it was the stage diving. My lord, the stage diving. He engaged me in an intense 20-minute discussion regarding the circumstances under which one would stage dive wearing a shirt, or shirtless (I did not actually know, so I said that maybe you kept your shirt on when wearing a jacket and tie – any stage-divers who can clear this up?). Weeks later, his tiny shirtless form is still propelling itself floorward from various items of furniture.

Then he asked to watch it again, and the quotes started, in flawless Jack-Black delivery. He’ll change them up to fit his circumstances, though. I don’t always recognize them as quotes right away, so you can imagine my WTF expressions when my kid says stuff to me like:

Or, after handing me a friend’s Guitar Hero guitar: “OK, Mommy, the blue one right there? That’s G. OK, you’ve got it! Now just keep that G coming all day long.”

I suspect his recent habit of referring to “um [eyes rolled to the side, tongue click], my GIRLFRIEND” (apologies to Zoe’s parents) is related to Mike White’s character in the movie, but will have to watch again to be sure.

Finally a few days later he realized his dream: To see Jack Black on Yo Gabba Gabba. While watching, he said this, which I believe I will leave you with:

I hate cigarette smoke as much as the next guy does.

And quite possibly more than most. Being honest here. HOWEVER.

I would like to state for the record that I had NOTHING – N-O-T-H-I-N-G – to do with the fact that, when we’re outside somewhere and my child spots a smoker, this is what he does.

AHHHHHHH! OH NO! OH NO! Somebody’s smoking! What can we do, Mommy? Where can we go to be safe? QUICK! RUN!

In real life, I’m trying to settle him down on that issue. In blog life, it’s kind of hilarious.

Posted in Life. Universe. Everything., Oh, the Urbanity!, The Boy | 1 Comment »

New site, and what happens when you raise your child around creative types and heathens.

Hi! I keep writing complicated posts and thinking, “Oh, this will take forever, let me just write a short one,” and then that takes forever and… well, let’s just say my dashboard looks like those Russian nesting dolls now.

But what I *did* manage to do is build a new little site; it’s called Waterloo Sunset and is a tribute to the song of the same name. I’m rather pleased with it.

This morning, W. and I were playing in the courtyard of a closed museum down the street. Across the street, a church service let out.

[After a minute]
“Why did you think they were Presidents?”
“Because they’re wearing President clothes.”

I am so pleased with that.

Posted in Life. Universe. Everything., Music, State of the Blog, The Boy | Comments Off

Wes was in trouble at school today, for the fourth consecutive school day (in order: hitting, poking, kicking and teasing little kids after being asked to stop. Hey, no violence today – that’s something!).

We were talking about this, and the fact that the little kid in question (Justin) had teased him back. I was trying to make what I thought was a fairly subtle point regarding why he might get in trouble and J. might not, necessarily (hint: giant instigator). Not subtle enough, apparently; he saw it coming at every turn and blocked it relentlessly. Finally, to my “Did Justin get in trouble?” he unleashed this awe-inspiring response.

“YES. He DID get in trouble. And he lost his snack and his dinner and his dessert and all his rewards. And his bedtime stories and no bubble bath and no bath toys and no drying off, just straight into his pajamas and to bed. Wait, NO pajamas. He had to go to bed NAKED.”

Top of the food chain, Ma.

Wes has been big on playing around with people’s names lately (we won’t talk about the unfortunate effects that has at school just now). This morning, as I was washing my hair, he came in and announced, “Mom-hair!”

So I said hello with my hair, as you do.

“No, Mom-hair is not just hair, it is a person with a smiley face. And it is a vegetarian.”

“Wes-hair is a meat-eater!” Pause. “And also there is a dinosaur standing on the lawn of the castle and he just loves the taste of princesses. So he ate them all up.”

“Not for the dinosaur.”

Clearly, Mom-hair does not have the proper perspective on these things.

What passes for entertainment when you have a full house and the flu shot didn’t work.

Everybody’s sick. The kid has been banging on a drum and singing “Yellow Submarine” past the point where it’s cute.

“Hey, do you know any other Beatles songs?”

“We all live in a yellow submarine…”

[A moment of silence, then the drumming resumes, then in a much deeper voice:]

“We all live in a yellow submarine…”

Two conversations: Parenting a kid with Hollywood in his blood.

The first one was standard preschool stuff, but is necessary for context. While making out Valentines for all the kids in his class:

“OK, next is Joshua.”
“Joshua. I call him Dossy-wa.”
“You do? What does he think of that?”
“He doesn’t like it. He fights me to make me stop.”
“Well, don’t do that, dude! Would you like it if someone made fun of your name?”
[Deep thought]
“If he called me Wessey, then I would try to fight him to make him stop.”

The next day, in the car:

A brand-new way of looking at the common cockroach.

There I was, making a meal for the boy and me, when I saw it. Well, you couldn’t miss it: this big ol’ cockroach was just standing in the middle of my kitchen counter waving hi.

I did my best job at balancing “OH MY GOD there is a ROACH in my kitchen AUUUUGHHH” with trying not to freak out about a bug in front of a 3-year-old.

Me, with perhaps just a little more anguish than I’d have preferred: “Well… I don’t KNOW. I don’t KNOW why it’s here.”

“He’s twying to decide what to do about you.”

Unfortunately for Mr. Bug, he has a much smaller brain than I do and I decided what to do about him first. I’m quite certain there are no more where he came from. Right?